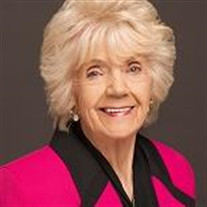 Íeda Jónasdóttir Herman, age 94, of Burlington, IA, formerly of Morton and Bloomington, IL, entered heaven on Wednesday, October 9, 2019 in Burlington, IA. She was born to Jonas Bjornsson and Dagbjort Oktavia Bjarnadottir in Reykjavik, Iceland on May 21, 1925. She married Rev. Delbert J Herman on March 25, 1945 in Reykjavik and he preceded her in death on Feb. 26, 2015. Íeda is survived by her children, Lucille Baker, IL; Del (Carina) Herman, BC Canada; Marian Tucker, WI; Peggy Herman, WA; Christine (Larry) Butterfield, IL; Myra (Don) Chaput, UT; Jonathan (Susan) Herman, CO; Timothy (Bonnie) Herman, FL; Della (Alan) Schmidt, IA; Heidi (Raymond) Herman-Kerr, SD; 18 Grandchildren; 24 Great-Grandchildren; 8 Great-Great Grandchildren and one more on the way. She is also survived by sisters, Sisi Ridley, TX; Lilla Martino, FL, and nieces and nephews. She was preceded in death by her parents, brothers and husband. Íeda was a full partner in Christian ministry with her husband for 60 years, together building and serving several churches throughout Central Illinois. She served in worship teams, women’s ministries, was a Sunday School teacher, and a counselor. Íeda also provided interior design services for church building projects. She served in leadership for the Bible Truth Crusade, a Christian non-profit ministry. She was a Graduate of the Chicago School of Interior Design, Illinois, and of the Institute of Children’s Literature, Connecticut. She authored and co-authored five books. Íeda also owned and operated an Interior Design and Window Covering business for several years. Later in life, Íeda reconnected with her Scandinavian heritage. She was a founding member of the Icelandic National League of the United States and past member of the Icelandic National League of North America. She spoke frequently at Scandinavian festivals and Sons of Norway chapters around the US. A funeral service for Íeda will be held at 4:00 PM on Thursday, October 17, 2019 at Glad Tidings Assembly of God in East Peoria. Visitation will be held two hours before the service at the church. Burial will be private at East Lawn Memorial Gardens Cemetery in Bloomington. Memorial donations in honor of Ieda may be made to Compassion International. Gary Deiters Funeral Home & Cremation Services is assisting the family with arrangements. Online condolences may be left at www.GaryDeitersFH.com A Fond Farewell (1925-2019) Off on my biggest adventure yet! Yesterday I posted that I didn’t know if I was coming or going and today I found it was time to go. This morning, I had just jumped in my car to go to a chiropractic appointment when a much more important meeting came up. I traded my car for wings. It was time to go to my heavenly reward and see my beloved Delbert. Know that I love you all and will miss all the adventuring here. Life has been a blast but I am so happy to be going home. I lived well, loved well, and was thankful for every day. Bless Bless and Goodbye Yesterday cannot be re-lived and regret serves no purpose. Tomorrow isn’t here yet and worry won't solve any problems. Today is all you have. Live in the moment. Treasure it and make the most of it. You are not guaranteed that tomorrow will come. If it doesn’t, know that you gave your best today. Be happy, be vibrant. Love yourself and those around you. Today is the best day to be alive. - Íeda Jónasdóttir Herman, from her book “Happiness in Living Color” As a citizen of Iceland, I enjoyed the odd beauty of my country; the mountains, the glaciers, and the fjords, yes, even the eruptions of awesome volcanoes. As a citizen of the Beautiful and Amazing United States of America, it has been my pleasure to travel from the West Coast at the Pacific, to the East Coast at the Atlantic and from the north, at the Canadian border, to the southern tip of Florida, the Florida Keys, and through many States in between. As a citizen of Heaven for almost sixty years, I am looking forward to the day I will get to explore and enjoy this, most beautiful country of them all… - Íeda Jónasdóttir Herman, from her memoir “Growing Up Viking”

The family of Íeda Jónasdóttir Herman created this Life Tributes page to make it easy to share your memories.

Send flowers to the Herman family.