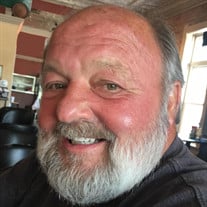 Benjamin Daniel Joos, Jr., 64, of East Peoria, died at 1:46 PM on May 22, 2020 at OSF Saint Francis Medical Center in Peoria, IL. Benjie was born on October 4, 1955 in Peoria, the son of Benjamin Daniel, Sr. and Berniece (Kyburz) Joos. He was formerly married to Jerelyn (Selburg) Joos. Benjie is survived by his two sons, Benjamin “Chad” (Melissa) Joos of East Peoria and Christopher Thomas (Michelle) Joos of Groveland; four siblings, Cheryl (Bill) Blunier of New Haven IN, Barbara (Tom) Mauhar of Lincoln, Dennis (Kitty) Joos of Peoria, and Bonnie (Stephen) Nave of Washington; six grandchildren, Jerelyn, Julia, Jacqueline, Benjamin, Maximus, and Samuel; and several nieces and nephews. He was preceded in death by his parents and one sister, Jane Hellrigel. Benjie attended East Peoria Community High School and soon after became a second-generation bricklayer working in the trade for 40+ years, retiring as owner of Ben Joos Construction. Benjie was a dedicated supporter of our veterans and volunteered countless hours in the kitchen at the Morton VFW. Benjie’s passion for life centered around spending time with his family, fishing, and boating. Later in life, he enjoyed helping out around the family farm, traveling, and riding his Harley with “his girl,” Anita Haddock. Benjie was known to many and greatly loved by his friends and family. He will be deeply missed. Visitation (with social distancing observed) will be from 5-7 pm on Tuesday, May 26th at Gary Deiters Funeral Home & Cremation Services, in East Peoria. Funeral services will be on Wednesday, May 27th at 11:00 am at the funeral home. Burial will be in Apostolic Christian Church Cemetery in Tremont. Memorials may be made to the Morton VFW or the Theresa Tracy Trot.

The family of Mr. Benjamin Daniel Joos Jr. created this Life Tributes page to make it easy to share your memories.

Send flowers to the Joos family.