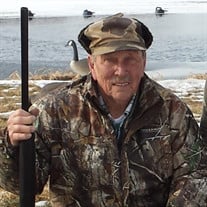 Billie C. Newton, age 85, died at his home in Peoria with his family by his side on Saturday, December 14, 2019 at 9:25 AM. Born to the late Charles “Dick” Calvin and Mary Velma (Greene) Newton on July 10, 1934 in Lawrence County, Fall River, TN, he married Valeria J. Sutton on November 28, 1954 in Mississippi, and they were married for 65 wonderful years. Billie is survived by his children, Pamela “Pam” Newton of Peoria and Dale Wayne (Sheila) Newton of Bartonville; grandchildren, Charles “Chuck” Stephens, Crystal Newton, Makenzie Newton, and Derek Newton; and great-grandchildren, Daniel Newton and Jayden Martin. He worked as a supervisor at Caterpillar for 31 ½ years before his retirement in 1985. He also worked at Clyde Robison Volkswagen Garage. Billie first served his country in the National Guard and then the United States Army from 1957-1959, when he was honorably discharged. He took flying lessons, earned his pilot’s license, and enjoyed flying. Billie served on the Bellvue Village Schoolboard, Zoning Board, and was a trustee of the Village Board for 23 years. He was a member of the Hanna City Sportsman’s Club, a lifetime member of the Peoria Motorcycle Club, and a lifetime member of Woodmen of the World. He enjoyed fishing, camping, endurance motorcycle rides, and most of all, hunting. He adored his family and spent as much time with them as he could. Funeral services will be private, and Billie will be laid to rest in Smithville Cemetery in rural Hanna City. Reverend Kevin Breitbarth will officiate. Memorials in honor of Billie may be made to his family to help with expenses. Gary Deiters Funeral Home & Cremation Services is assisting the family with arrangements. Online condolences may be left at www.GaryDeitersFH.com

The family of Billie C. Newton created this Life Tributes page to make it easy to share your memories.

Send flowers to the Newton family.