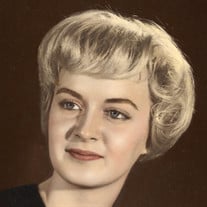 Carol A. Nena, 79, of Washington, formerly of East Peoria, passed away surrounded by her family, on September 4, 2021 at OSF Richard L. Owens Hospice Home in Peoria. Born on December 23, 1941 to Bernon and Florence (Eaton) Reichelderfer in Peoria, she married Jerry Nena on February 24, 1962; he survives. Also surviving are 2 sons; Jeffrey (Cathy) Nena of Mt. Dora, FL and Michael (Tina) Nena of Batavia, IL; her daughter, Kimberly (David) Mindar of Murfreesboro, TN; 5 grandchildren, Brian (Alyssa) Nena, Shelby and Louis Mindar, and Jessica and Zachary Nena; and one great grandchild, Bridget Nena, born on September 8, 2021. Preceding Carol in death were her parents; 2 brothers, Dr. Gerald B. Reichelderfer and Dr. Richard F. Reichelderfer; her sister Mignon M. Davis; and her grandson, Matthew Nena. Carol graduated with the EPCHS Class of 1959 where she was active in choir, dance and theater. Senior year she was voted Track Queen for the Greater Peoria Track Meet. She loved her class reunions and served as chair of several committees. After high school, Carol attended Midstate College in Peoria and became the secretary for the US Assistant District Attorney from 1960-1963. She then worked in the advertising department at Caterpillar from 1963-1965. After raising her family, she worked as a bookkeeper for the House of Ideas from 1986 until 1998, when both she and Jerry retired. Carol enjoyed cooking, playing cards, fishing and camping with her family. She and Jerry especially enjoyed their cabins in Oquawka, IL and Cass Lake, MN. While Jerry worked for Caterpillar the family enjoyed living in Scotland and Brazil. She was a member of St. Monica’s Catholic Church, where she had attended since she was a child. The family would like to thank Dr. Patricia Deters, the OSF Hospice staff, and Nurses Kelsey and Jan for their special care. There will be a Memorial Service at 11:00 AM on Saturday, September 18, 2021, with visitation at 10:00 am, at Gary Deiters Funeral Home & Cremation Services in East Peoria. Following the service, a luncheon will be provided by St. Monica’s Guild at St. Monica’s Church Hall. In lieu of flowers, memorial contributions may be made to Easter Seals or TAPS. Online condolences may be left at www.GaryDeitersFH.com.

Carol A. Nena, 79, of Washington, formerly of East Peoria, passed away surrounded by her family, on September 4, 2021 at OSF Richard L. Owens Hospice Home in Peoria. Born on December 23, 1941 to Bernon and Florence (Eaton) Reichelderfer in Peoria,... View Obituary & Service Information

The family of Carol A. Nena created this Life Tributes page to make it easy to share your memories.

Carol A. Nena, 79, of Washington, formerly of East Peoria, passed...

Send flowers to the Nena family.