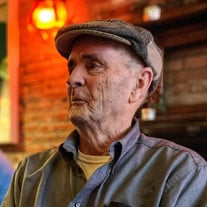 Dale Jerome Finnell, 86, passed away peacefully at his home on Tuesday, October 6, 2020. His wife, Mary Finnell (Funfsinn), sat lovingly by his side. Dale was born on October 1, 1934 at his family’s farm in Pontiac, Illinois. He was the sixth of eight children of Leo and Irene Finnell (Swaggert). A multi-sport athlete in high school, Dale Finnell was inducted into the Pontiac High School Sports Hall of Fame as a member of the 1949 Men’s Track and Field Team. He would go on to study history and run cross country at Illinois State University. After his sophomore year, he transferred to St. Paul’s Seminary in Minneapolis where he would be ordained as a Franciscan priest. Thereafter, Dale was known as Fr. Finnell to congregations at St. Monica’s in East Peoria, St. Peter and St. Pauls’ in Peterstown, Immaculate Conception in Spring Valley, and Holy Cross in Mendota. Later in life, Dale transitioned from Fr. to dad, leaving the priesthood to start a family with his wife Mary. He would spend the rest of his working days at both Neal’s Auto Parts and Caterpillar while raising three children and welcoming six grandchildren. He was a beloved father, grandfather, and husband. We will miss him every day. Dale will be lovingly remembered by his wife of 44 years, Mary; children, Jamie Lauer, Angie Finnell-French, Joshua Finnell; son and daughter-in-laws, Tom Lauer, Dan French, Anne Valente; grandchildren, Ryan, Kaitlin, Violet, Ruby, Bradley, Lumen; siblings, Punky Juarez and Toby Finnell; and numerous other family members and friends. Dale was preceded in death by his parents, Leo and Irene; siblings, Marilyn, Chuck, Gene, Carol, and Jack. A visitation will be held at Gary Deiters Funeral Home & Cremation Services in East Peoria, IL on Friday, October 9, 2020 from 5:00-7:00 PM. A funeral mass will be celebrated on Saturday, October 10, 2020 at 10:00 AM at St. Mary of Lourdes Catholic Church, with visitation from 9:15-9:45 AM. Burial will be in St. Mary of Lourdes Cemetery. Memorial donations in Dale’s name may be made to the Peoria Area Food Bank. Gary Deiters Funeral Home & Cremation Services is assisting the family with arrangements, and condolences may be left at www.GaryDeitersFH.com.

Dale Jerome Finnell, 86, passed away peacefully at his home on Tuesday, October 6, 2020. His wife, Mary Finnell (Funfsinn), sat lovingly by his side. Dale was born on October 1, 1934 at his family&#8217;s farm in Pontiac, Illinois. He was the... View Obituary & Service Information

The family of Dale J. Finnell created this Life Tributes page to make it easy to share your memories.

Dale Jerome Finnell, 86, passed away peacefully at his home on...

Send flowers to the Finnell family.