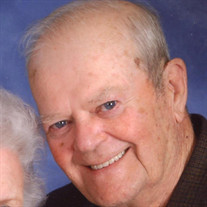 Delwin G. Davis, age 88 of East Peoria, died peacefully on Thursday, December 31, 2020 at OSF Richard L. Owens Hospice Home in Peoria. He was born December 22, 1932 in Hampshire, IL to Marion “Bill” and Florence (DeWitt) Davis. He married Marjorie Kelly on August 31, 1957 at St. Mary’s Cathedral in Peoria. She preceded him in death on February 2, 2016, along with one son, John Delwin Davis, two brothers, William and Hiram Davis, and one sister, Karen Davis. Surviving are one daughter, Mary (Steve Hackleman) Dehne and one son Paul (Julie) Davis; and seven grandchildren, Leah Dehne, Chad (Kaylee McMillin) Dehne, Cole Dehne, Erica (Justin Haller) Davis, Brock Davis, Kaitlyn Davis, and Ryan Davis, who all lovingly called their grandpa “Poppy.” He was also known as Poppy to all their friends. We will all miss his ever-present smile and hugs. He truly loved his family, friends, and three cats. He was a veteran of the Korean conflict and worked for IL Bell for 31 years, retiring in June of 1986. He then “worked” for Quail Meadows Golf Course in East Peoria for 13 years where he enjoyed golfing and all the many friends he made over the years. He called it his happy place and loved going there several times a week until his illness. He was very proud of and known to brag about his four hole-in-ones on the course. He was a member of St. Monica’s Catholic Church for 50 years and served on several committees over the years. He was a 3rd Degree member of the Knights of Columbus, and very active in scouting while his sons were growing up and for many years beyond. He loved the outdoors and sharing his knowledge and skills with young people. A funeral service will be held at 1:00 PM on Monday, December 4, 2020 at Gary Deiters Funeral Home & Cremation Services in East Peoria. Visitation will be held one hour before. Covid regulations will be followed. Burial will be at Fondulac Cemetery. Memorials may be made to his church or TAPS. Online condolences may be left at www.GaryDeitersFH.com.

The family of Delwin "Del" G. Davis created this Life Tributes page to make it easy to share your memories.

Send flowers to the Davis family.