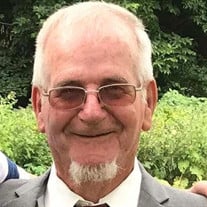 Donald “Don” Lee Kirby Sr., age 75, of Peoria, passed away on Friday, October 18, 2019 at UnityPoint Methodist in Peoria. Don was born on November 22, 1943 in Peoria to Charles and Doris (Potter) Kirby. Don is survived by his children, DeAnna (Don) Slavens of Peoria, Lucy Jo (Corey) Noonen of Chillicothe, Donnie (Trish) Kirby of Wyoming, David (Julie) West of Washington, and Jacquline Kirby of Peoria; siblings, Bobbie (Jack) Purfield of Washington, Billy (Donna) Kirby of Washington, Chuck Kirby of East Peoria, Dorothy (Randy) McConnell of South Carolina, and Debbie Kirby of East Peoria; nine grandchildren; and 5 great-grandchildren. He was preceded in death by his parents; the love of his life for 23 years, Mary Austin; and siblings, Francis Ray, Robert, Earl Jean, Pat, Carol, and Betty. Don served in the United States Army from 1962 until 1967. He then worked for DeHater Paper Co. for 25 years and was a member of the Teamsters Union. In his free time, Don enjoyed selling poppies to support veterans, golfing, fishing, watching the Cubs, old westerns (especially John Wayne), and spending time with his family. Don will be escorted by the Patriot Guard from Gary Deiters Funeral Home & Cremation Services who is assisting the family with arrangements in East Peoria. Promptly leaving at 9:45 AM to arrive by 10:00 AM at the Lutheran Cemetery in Peoria, where a graveside service with military honors will be held on Friday, October 25, 2019. Our close family friend and Evangelist Kenny Melton will officiate. A Celebration of Life will be held at the Veterans Pub & Pizza following the graveside service. In lieu of Flowers, memorials may be made to the Donald Kirby Memorial Fund, care of Morton Community Bank. Online condolences may be left for the family at www.GaryDeitersFH.com

The family of Donald "Don" Lee Kirby created this Life Tributes page to make it easy to share your memories.

Send flowers to the Kirby family.