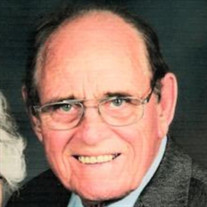 Edward “Ed” S. Winborn, 90, of East Peoria, passed away on Thursday, July 22, 2021, at Accolade Healthcare of East Peoria. He was born on March 21, 1931, to Ed and Macie (Cameron) Winborn in Birmingham, AL. He married Donna Rosenbaum in 1956; she preceded him in death in 2005. He later married Martha Thorne on March 22, 2008; she survives. He is also survived by his two sons, Bruce (Loretta) Winborn of Creve Coeur and Ricky (Terri) Winborn of East Peoria; his daughter, Karen Winborn of Creve Coeur; one sister, Rebecca Jane Taylor of Kansas City, MO; his 4 grandchildren, Lisa, Trevor, Dayton (Sarah), and Martin; and 2 great grandchildren, Henry and Abigail. Ed served in the Army during the Korean War from 1950-1952. He worked at Caterpillar for 4 years and as a Union painter with the Local 157, before retiring in 1996. He was a member of the Frank N. Nicol #1170 Masonic Lodge in Creve Coeur and the American Legion. Visitation will be from 5:00-7:00 PM on Wednesday, July 28, 2021, at Gary Deiters Funeral Home & Cremation Services in East Peoria, with Masonic Rites at 6:45 PM. Funeral services will be at 11:00 AM on Thursday, July 29, 2021, with one hour of visitation prior to the service at the funeral home. Burial, with military rites, will follow at Fondulac Cemetery in East Peoria. Memorials may be made to Woodland Baptist Church, where Ed was a member for over 50 years. Online condolences may be left at www.GaryDeitersFH.com.

The family of Edward "Ed" S. Winborn created this Life Tributes page to make it easy to share your memories.

Send flowers to the Winborn family.