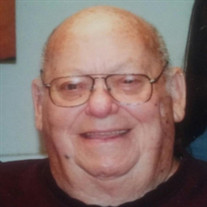 Edward Ben Tonjes, age 81, passed away on Thursday, April 30, 2020 at Methodist Hospital in Peoria. He was born December 29, 1938 in New Hartford, IA to Rudolf and Hilda Tonjes. He married Joanne Beran on October 26, 1957. Ed is survived by his wife Joanne; their children, Edie (Bill) Nimmo of Chillicothe, Ken (Bonnie) Tonjes and Donna Gass, both of Creve Coeur, and Bev Hughes (Tom Differding) of Liberty, MO; brother, Arnold Tonjes of Elma, IA; brothers-in-law, Morrie Meschke of Mesa, AZ, George (Jan) Beran of Ames, IA, and John (Rita) Beran of Lenox, IA; grandchildren, Melinda Tonjes, Kendra Tonjes, Samantha Hughes, Jessica Perron, Scott Hinton, and Josh Gass; and a host of great-grandchildren, nieces, and nephews. He was preceded in death by his parents, his in-laws, infant daughter Anna Marie, son-in-law Mel Gass, and sisters Marian Meschke and Marti Tonjes. Ed worked as a terminal manager for Warren Transport for 35 years, retiring in 1998. He was a Mason and a member of Hilton Lodge 1143 and Abbas Grotto for 45 years. He loved to fish. He enjoyed a good joke and always had a wisecrack for every occasion. His hobbies included woodworking, reading westerns, bird watching, and feeding the squirrels. He liked to watch football and basketball, but especially liked wrestling. He took great pride in riding his scooter around the neighborhood to pick up litter. Memorials may be made to South Side Mission or Peoria Rescue Mission. Cremation rites have been accorded. Due to current restrictions, a celebration of life will be held at a later date. Online condolences may be left at www.GaryDeitersFH.com, where service information will be posted when scheduled.

Edward Ben Tonjes, age 81, passed away on Thursday, April 30, 2020 at Methodist Hospital in Peoria. He was born December 29, 1938 in New Hartford, IA to Rudolf and Hilda Tonjes. He married Joanne Beran on October 26, 1957. Ed is survived by... View Obituary & Service Information

The family of Edward B. Tonjes created this Life Tributes page to make it easy to share your memories.

Send flowers to the Tonjes family.