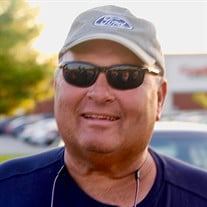 Gary Edward McCormick -- husband, father, grandfather brother, uncle, devoted friend, street rodder, veteran, business man, accomplished traveler, St. Louis gooey butter cake enthusiast, and overall force of nature -- died on December 10, 2018 at the age of 72. Gary McCormick’s life was like none other. As a young boy, Gary discovered his love for cars and speed through go-carting. He was a roller-skating champion in the state of Illinois and was such a talented trumpet player, that he sat first chair in an adult orchestra as a young boy. After being asked not to return to high school (by the school itself), Gary enlisted in the United States Army and served in South Korea. After returning to the States, Gary’s service continued on funeral detail. He played TAPS for 247 military funerals during the height of the Vietnam War. Gary was extremely proud of this portion of his service and had beautiful tales to tell from this time in his life. Gary married Antonia Dupage and they had a son Quinn in 1968. After their divorce, Gary went to work for CDL, a company which moved coal mining shovels. This job took him to Black Mesa, Arizona where he met Paula Flammang, a young school teacher working in Kayenta, Arizona, a community in Navajo Nation, after crashing a “teachers only” party. In 1978, Gary married Paula and they moved to Oak Creek, Colorado. In the fall of 1979, Gary and Paula moved to East Peoria, Illinois where he started working for his father Bill McCormick at Lumberyard Suppliers. Gary bought the business from his father in the early 80s. He took great pride in providing for his employees and their families. Gary was a dedicated advocate for the city of East Peoria. He and Paula were heavily involved in starting the Festival of Lights (Gary was Santa for the first three parades,) he was a founding member of the “opportunity zone” which brought business to the city and served on the board for the construction of East Side center. In 1990, Gary welcomed his daughter Katie into the world. He was a fantastic father who learned how to play Barbies, knew all the lyrics to the songs in “The Little Mermaid” at age 52, shared her love of Harry Potter and always served as her biggest fan. In 1992, Gary’s granddaughter Samantha was born. They shared a love of food, rock n’ roll and not finding themselves in traditional academics. Samantha and Gary also share an infectious laugh. Gary welcomed two Great-Granddaughters, Ailla and Adilynn in 2015 and 2016. Gary was passionate about all of the young people in his life and took great pride in their accomplishments. He enthusiastically welcomed all of Katie’s friends, treated his friends’ children as his own and leaves a behind a beautiful legacy of love, down to the last niece and nephew. Gary retired from Lumberyard Suppliers around the year 2000 to focus on his love for building cars and farming. Gary created beautiful, award-winning cars and enjoyed many tractor rides but what was most important about the time he spent pursing these passions were the strong bonds he formed. His farming and street-rodding communities embraced him and were like second families to him, his wife and his daughter. A few days before his death, Gary drove to Taylorville, Illinois in order to deliver aid to a family in need following the recent tornado. Gary constantly had other peoples’ needs on his heart and always followed through on his impulses to help others. Gary departed this world surrounded by good friends and good food, the most appropriate departure his family can think of. Gary loved fiercely and will be fiercely missed by those he loved. But mostly, his loved ones are grateful they got the chance to accompany him on his 72-year-long car ride home. Visitation will be Thursday from 4-7 PM at Gary Deiters Funeral Home & Cremation Services, 444 E. Washington St., East Peoria. Service will be at 10 AM on Friday at the funeral home. Burial will follow at Our Lady of Lourdes Cemetery in Metamora. Pastor John Bates and Pastor Richard Hanson will officiate. Memorials may be made to St. Jude Midwest Affiliate or Children’s Miracle Network.

The family of Mr. Gary E. McCormick created this Life Tributes page to make it easy to share your memories.

Send flowers to the McCormick family.