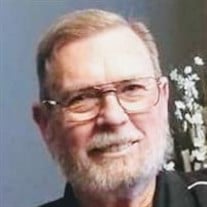 Harold “PJ” Pettijohn, 75, passed away on Wednesday, July 29, 2020 at his home in East Peoria with his wife by his side. He was born to Jesse and Mary (Martin) Pettijohn on November 25, 1944 in Moultrie, GA. He married Jacquelyn R. McCarty on June 14, 2002 in Owensboro, KY. PJ is survived by his wife Jackie of East Peoria; step-children, Tonya (Dennis Humes) Bridgwater of East Peoria, David (Lori) Streitmatter of Collierville, TN, Doug (Carrie) McCarty of Morton, and Carrie (Jeff Brinkmann) McCarty of East Peoria; nine step-grandkids; sister, Ann (Denny) Blair of Valdosta, GA; aunt, Margaret Bannister of Coolidge, GA; and many nieces, nephews, and cousins. He was preceded in death by his parents, grandparents, and one cousin. He served in the United States Air Force from 1967 – 1970, during the Vietnam War, when he was honorably discharged. PJ worked as a Highway Maintainer for the Illinois Department of Transportation in Champaign, retiring in 2011 after 13 years, and for Halliburton: Oil Field Services, working in the oil fields and on pipelines all across the country. He enjoyed hunting, shooting guns and was a huge diehard Georgia Bulldogs fan. PJ was a member of the VFW Riders and loved riding his Harley. It was PJ’s wish to be cremated, and no funeral services will be held at this time. Gary Deiters Funeral Home & Cremation Services is assisting the family with arrangements. Online condolences may be left at www.GaryDeitersFH.com.

The family of Harold "PJ" Pettijohn created this Life Tributes page to make it easy to share your memories.

Send flowers to the Pettijohn family.