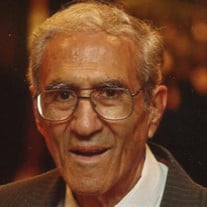 Harry M. LaHood II, 85, of Washington (formerly of Peoria) died at 5:20 PM on Friday, November 2, 2018 at his home surrounded by his loving family. He was born on September 8, 1933 in Peoria to Harry M. and Cecilia (Couri) LaHood Sr. He married Gloria A. Hetherlin on August 21st, 1955 in Salem, MA. She survives. Also surviving are 7 children, Rebecca (Richard) Parks of Peoria, David (Kelly) LaHood of Peoria, Joseph (Susan) LaHood of Washington, John (Zeina) LaHood BeShara of Washington, Stephen LaHood of St. Peters, Mo, Daniel (Cindy) LaHood of Washington and Matthew (Lisa) LaHood of Suwanee, GA; 27 grandchildren; 11 great-grandchildren; 5 siblings, Kathryn (Carl) Williams of Peoria, “Edward” Amin (Emily) LaHood of Peoria, Richard (Patricia) LaHood of Washington, Mary Ann (Thomas) Penn of Peoria and Joy Annette (Mike) Tonsor of Groveland. He was preceded in death by 2 sons, Thomas and Harry III. Harry graduated from Woodruff High School, class of 1951, then served in the Navy during the Korean War. After the navy, he became an electrician and retired as a Journeyman after 30 years. Harry also owned and operated Quick ‘n Clean laundromats. He was a member of the IBEW Local #34, ITOO society, Peoria Sculling Club and an early member of the Peoria Cursillo movement. He was an accomplished singer in several productions with Corn Stalk and Peoria Players Theaters. He enjoyed being outdoors and spending time with his family and friends. A loving and enduring man. Harry is remembered as wise and thoughtfully spoken. Visitation will be Monday, November 5 from 4-7 PM at St. Patrick Catholic Church in Washington. Funeral Mass will be at 10 AM on Tuesday, November 6 at St. Patrick Catholic Church, additional visitation will be from 9-9:45 AM. Burial will follow at St. Joseph Catholic Cemetery in Peoria. Memorials may be made to St. Patrick Catholic Church. The staff at Gary Deiters Funeral Home & Cremation Services are assisting the family with arrangements.

Harry M. LaHood II, 85, of Washington (formerly of Peoria) died at 5:20 PM on Friday, November 2, 2018 at his home surrounded by his loving family. He was born on September 8, 1933 in Peoria to Harry M. and Cecilia (Couri) LaHood Sr. He married... View Obituary & Service Information

The family of Mr. Harry M. LaHood II created this Life Tributes page to make it easy to share your memories.

Send flowers to the LaHood family.