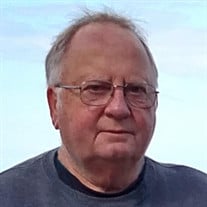 Jay S. Avery, age 83, of East Peoria, IL, passed away on Monday, November 2, 2020, at UF Health The Villages Hospital in Florida surrounded by his wife and daughters. The world has lost a great husband, father, and leader. Jay was born to Virgil Avery and Marguerite (Rebeke) in Peoria, IL on May 13, 1937. He married his high school sweetheart Nancy Brownfield on May 5, 1959, she survives. He is also survived by his three daughters, Jayne Story (Alec) of Houston, TX, Jananne Brockman (Brad) of Somers, MT and Jaye Crouse (Michael) of Herriman, Utah; one brother, Gail Avery; five grandchildren; and nine great grandchildren. Jay was preceded in death by his parents. Jay lived a very full life. As a child and up to 18 years of age, he performed in competitive partner dancing where he earned the nickname “Tip” because he was always dancing on his tip toes. He graduated from East Peoria Community High School in May of 1955 and began working at Caterpillar as a floor sweeper. In October of 1955, he was accepted into the Machinist Apprenticeship Program. He was laid off from Caterpillar multiple times between 1957-1964 and worked as a meat cutter apprentice and journeyman at Kroger’s and Buehler Grocery Store. He permanently returned to Caterpillar in May of 1964 and finished the Machinist Apprenticeship. His Caterpillar career spanned 40 plus years as he continued to work on a consultant basis until the age of 77. He spent many of those years working in England and Europe. He was admired by many coworkers as he would rather show you how to fix the problem instead of fixing it himself, earning the nickname “the professor.” Jay enjoyed traveling throughout Europe. His favorite destinations revolved around World War II and castles. He was an avid golfer and woodworker. He was so intelligent; he always had a solution for a problem. His children had coined the phrase, “go ask dad,” whenever they needed to know something. A public graveside service will be held at 11:00 AM on Thursday, November 12, 2020 at Fondulac Cemetery in East Peoria, IL. Gary Deiters Funeral Home & Cremation Services is assisting the family with arrangements. Memorial donations in Jay’s name may be made to St. Jude or South Side Mission. Online condolences may be left at www.GaryDeitersFH.com.

Jay S. Avery, age 83, of East Peoria, IL, passed away on Monday, November 2, 2020, at UF Health The Villages Hospital in Florida surrounded by his wife and daughters. The world has lost a great husband, father, and leader. Jay was born to Virgil... View Obituary & Service Information

The family of Jay S. Avery created this Life Tributes page to make it easy to share your memories.

Send flowers to the Avery family.