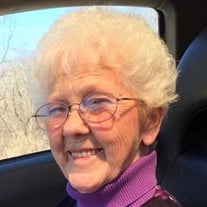 Junell King, 85, of Creve Coeur, went to be with her Lord and Savior on Monday, May 10, 2021 at Grandview Alzheimer’s Special Care Center in Peoria. She was born on June 10, 1935 to Jim and Ova (Sanders) Frix in Finger, TN. She married Paul Gilbert King on January 14, 1956 in Corinth, MS; he preceded her in death on March 24, 1988. She is survived by her daughter Debbie (Patrick) Simmons of Creve Coeur; her 2 sons Dale (Tamara) King of Washington and Russell (Jennifer) King of Metamora; her brother James Frix of Henderson, TN; her grandchildren Shawn (April) and Tracy Simmons, Rusty and Jessica King, Hailey King, and Adam Ladd; and her great grandchildren Ashley and Caitlyn Simmons, and Carter and Abigail Nussel. She was preceded in death by her parents and 10 siblings. Junell worked at GEMCO in Peoria and later as a bookkeeper for Community Bank in East Peoria. She loved birdwatching, gardening, and playing cards, and was known for her baking talents. She was a member of Elm Ridge Baptist Church for over 60 years. Junell accepted Christ as her Lord and Savior as a young girl and was always faithful to Him. As she approached the end of her life, she was excited to see her Lord face to face. We are comforted with the confidence of knowing she is rejoicing with Him and Gilbert. A funeral service will be held at 12:00 PM on Thursday, May 13, 2021 at Elm Ridge Baptist Church in East Peoria, with visitation, at the church, one hour prior to the service. Brother Ken Terbush will officiate. Private inurnment will be at Glendale Memorial Gardens in Pekin. Memorials may be made to her church. Online condolences may be left at www.GaryDeitersFH.com.

The family of Junell King created this Life Tributes page to make it easy to share your memories.

Send flowers to the King family.