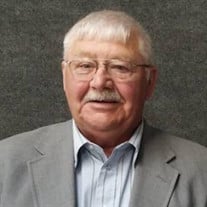 Larry “Buck” Buchanan, age 79, of East Peoria, passed away at 4:57 PM on Tuesday, September 3, 2019 at OSF St. Francis Medical Center in Peoria. He was born to Ribern and Idalene (Zimmerman) Buchanan in Pekin on July 14, 1940. He married Donna Jean Carter on July 7, 1969 in Pekin and they celebrated their 50th wedding anniversary this year. Buck is survived by his wife Donna of East Peoria; son, Jeff Buchanan of Kenosha, WI; daughter, Cathy (Nick Kutzko) Buchanan of Calumet City; stepdaughter, Debra Pumphrey of East Peoria. Buck loved being a grandpa to his eight grandchildren and eight great-grandchildren. He was preceded in death by his parents; stepfather, Walter Erxleben; stepson, Kevin Carter; one granddaughter, Brooke Pumphrey; one great-grandson, Hunter Staples; and one sister, Bonnie. Buck served in the United States Air Force. He retired from Caterpillar as a supervisor and later worked for MH Equipment in sales. He also worked for the Morton Auxiliary Police Department and worked part time for Aaron’s Limousine Service. He was a member of Glad Tidings Assembly of God for over 30 years and will be fondly remembered for his big heart and great sense of humor. Some of Buck’s favorite pastimes included watching NASCAR and the Chicago Cubs and golfing with friends. A funeral service for Buck will be held at 10:30 AM on Monday, September 9, 2019 at Glad Tidings Assembly of God, located at 2201 East Washington Street in East Peoria. Pastor Fred Doughty will officiate. Visitation will be held the afternoon before, Sunday, September 8, 2019, at the church from 3:00-5:00 PM, as well as 30 minutes before the funeral service on Monday. Interment will take place at Oakwood Cemetery in Metamora. The staff at Gary Deiters Funeral Home & Cremation Services is assisting the family with arrangements. Memorial donations in honor of Buck may be made to his church.

The family of Larry "Buck" Buchanan created this Life Tributes page to make it easy to share your memories.

Send flowers to the Buchanan family.