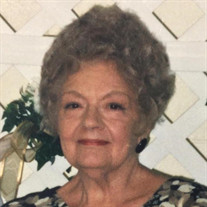 Lela “Lee” Rule Riekert, age 98 of Washington, departed this life peacefully at 2:34 PM on Wednesday, May 6, 2020 at Unity Point Health Methodist in Peoria. She was born September 29, 1921 in Noble, IL to John H. Rule and Inez Davis Rule. She married Robert G. Riekert on June 3, 1950 and he preceded her in death in August 2013. Surviving are one son, Larry (Pam) Riekert of Surprise, AZ; two grandchildren, Jamie (Peter) Bolema of Grand Rapids, MI, and Christopher Riekert of Morgan Hill, CA; two great grandchildren, Ramsey Bolema and Lela Bolema; one brother, James Russell Rule of Greenville, SC; and two sisters, Nadine Rule Scott of Denver, CO and Martha Rule Kallister (Dave) of Glasford. Both parents, twin sisters and two brothers preceded her in death. She worked for Caterpillar during World War II, Princess Peggy, and attended St. Francis School of Nursing. Lee was an RN at the Apostolic Christian Home for 18 years, retiring in 1985 to care for her parents. She attended Christian Freedom Church while in Noble, IL and Mossville Methodist Church. She was baptized in the Christian faith. Lee fully enjoyed life. She was an incredible positive thinking person, never met a person she didn’t like and always tried to improve. She loved animals, nature, flowers, gardening, and anything creative. She was never idle and continued to work in the garden and around the house into her 90’s. She loved her family and was particularly proud of her grandchildren. She was a terrific mother and grandmother, incredibly strong, patient and wise. She was a friend to all who knew her. A private graveside service will be held at Swan Lake Memory Gardens in Peoria. Memorials may be made to the Alzheimer’s Association, Central Illinois Chapter or to her church. Online condolences may be left at www.GaryDeitersFH.com.

The family of Lela "Lee" Riekert created this Life Tributes page to make it easy to share your memories.

Send flowers to the Riekert family.