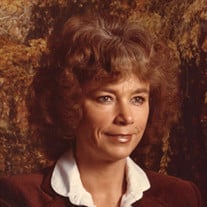 Loretta A. Dickson, age 76, passed away on Friday, May 15, 2020 at her home in East Peoria. She was born to Earl and Essie Lewis on July 7, 1943 in Alexandria, VA and married Charles Dickson in Evansville, IN in 1968. They divorced in 1997 but remained close friends. Loretta is survived by her ex-husband Charles of East Peoria; children, Scott (Pamela) Dickson of Groveland and Jerrol Dickson of East Peoria; grandchildren, Michael Shea (Kelsey) Dickson of Robein, Ciji (Tony) Schoedel of Tremont, Codie Dickson of Groveland, Lexie Dickson of Tremont, Melissa Garrison of Pekin, Janessa (Nathan) Busch of Pekin, and Christa (DJ) Hannah of Pekin; great grandchildren, Tierra, Owen, Noah, Nicholas, Natalie, Jaxyson, Ellie, and Emmett; and nephews Robert (Cindy) Schaffer and David Dickson, both of Clarksville, TN. She was preceded in death by her parents, and one son Terry Dickson. Loretta worked at OSF St. Francis Medical Center for over 30 years as a Registered Nurse. Visitation will be held at Gary Deiters Funeral Home & Cremation Services on Wednesday, May 20, 2020. Online condolences may be left at www.GaryDeitersFuneralHome.com

The family of Loretta A. Dickson created this Life Tributes page to make it easy to share your memories.

Send flowers to the Dickson family.