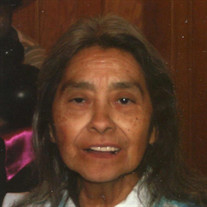 Margaret Mary Gordon, age 84, passed away on Wednesday, April 29, 2020 at her home in Peoria. She was born to Angel and Pauline (Hernandez) Sierra on May 14, 1935 in Peoria. She married Robert “Bob” Gordon, and was later with David Isaac Wilson, and they both preceded her in death. Margaret is survived by four children, Richard A. (Kimberly) Gordon of Germantown Hills, Georgeanna E. Gordon of Peoria, David Andrew Isaac Wilson of Peoria, and Margaret “Margarita” Rose (Darrell Tillman II) Gordon of Peoria; seven grandchildren, Jason R. Gordon, Nicole A. Gordon, Erica Gordon, Estephan (Shonna Clendenin) Sierra, America Sierra, Journi Gordon, and Darrell “Malik” Tillman III; four great-grandchildren; one brother, Savino (Barb) Sierra of Peoria; and many nieces, nephews, and cousins. She was preceded in death by 15 brothers and sisters. Margaret worked for Steak n’ Shake, assisted in Pediatrics at Methodist Hospital, and retired as a teacher from the Neighborhood House in 1997 at 62 years old. Margaret was a lifelong member of St. Ann’s Catholic Church in Peoria. She loved to set up and take care of the coffee room at the South Side Manor where she lived until 2019. Her greatest joy was spending time with her grandkids and family, as well as her extended family residents at South Side Manor. A private graveside service will be held at St. Mary’s Cemetery. Memorials may be made to the Arthritis Association or the National Kidney Foundation. Online condolences may be left at www.GaryDeitersFH.com

The family of Margaret Mary Gordon created this Life Tributes page to make it easy to share your memories.

Send flowers to the Gordon family.