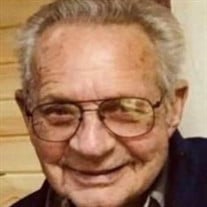 Melvin Christianson, 78, of East Peoria, passed away on Sunday, April 3, 2022, at OSF Richard L. Owens Hospice Home in Peoria. He was born in Peoria on October 7, 1943, to Roy and Priscilla (Largent) Christianson. He married Kimmie Jo Shryock on May 27, 2006, in Groveland; she survives. Also surviving are his 4 children, Melinda Sue Webb of Giddings, TX, and Marci Marshalek, Kristin Christianson, and Jazmine Christianson all of East Peoria; 4 stepchildren, Jesica Doerr of East Peoria, Troy Heuck of Chillicothe, Shawn Jaymes of Pekin, and Shane Heuck of Chester; 2 brothers, Dale Christianson of East Peoria and Norman Christianson of TN; 7 grandchildren; 12 step-grandchildren; 6 great-grandchildren; and his best friend, Rusty Grammer of East Peoria. He was preceded in death by his parents; 4 brothers, Ted, Roy, Kenny, and Loyd; and 2 sisters, Evelynn and Ruth. In 1965, Melvin joined the Army and served as a gunner on a helicopter during the Vietnam War. He owned and operated Christianson Enterprises as a truck driver for 30 years. In 2009, he opened Mel’s Café in East Peoria, and operated it with his wife, Kimmie, since then. Melvin was a member of the VFW and the American Legion in East Peoria. He loved watching Nascar and dirt track racing. Visitation will be from 5-7 p.m. on Thursday, April 7, 2022, at Gary Deiters Funeral Home & Cremation Services in East Peoria. A graveside service will be held at 2:00 p.m. on Friday, April 8, 2022, at Camp Butler National Cemetery in Springfield. Memorials may be made to Wounded Warrior Project. Online condolences may be left at www.GaryDeitersFH.com.

The family of Melvin Christianson created this Life Tributes page to make it easy to share your memories.

Melvin Christianson, 78, of East Peoria, passed away on Sunday,...

Send flowers to the Christianson family.