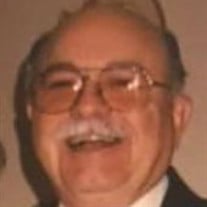 Melvin Monroe Taylor, 88, of East Peoria, IL passed away Monday, December 14, 2020 at Lakeside Rehab & Healthcare in East Peoria. He was born July 19, 1932 in Harlan, KY to Claude and Anabel Castle Taylor. He married Shirley Boggs; she survives. He is also survived by his sister, Wanda Shepler of East Peoria, IL; grandson, Jeffrey Anderson of Lexington, KY; stepdaughters, Diana Connell of East Peoria, IL, Malinda Johnson of Santa Cruz, CA; stepsons, Arthur Boggs of Peoria, IL, Michael Boggs of Evarts, KY and Steven Boggs of San Diego, CA and numerous step-grandchildren and step-great-grandchildren. He was preceded in death by his daughter, Melody Anne Taylor Anderson; father, Claude Taylor; mother, Anabel Taylor and sister, Geraldine Jewel Taylor Slusher. Melvin served in the U.S. Army and previously worked as an accountant, high school teacher and managed a storage facility. Melvin was a Christian of Evangelical (Pentecostal) faith. Mel was known and loved for his quick wit, infectious smile, and laughter. He enjoyed sports, played basketball, fishing, exploring and family gatherings. He would probably say “Don’t cry for me, though I won’t mind if you do! Now that I’m gone to Heaven, be happy I was here and that you were a part of my life!” Cremation rites were accorded. A memorial service will be held at 2:00 PM on Monday, May 24, 2021 at Gary Deiters Funeral Home & Cremation Services in East Peoria. Inurnment will be at Roberts Cemetery in Morton, at a later date. Online condolences may be left at www.GaryDeitersFH.com.

The family of Melvin M. Taylor created this Life Tributes page to make it easy to share your memories.

Send flowers to the Taylor family.