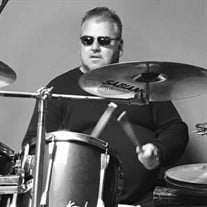 Murray P. Ice, 61, of Peoria, passed away on Saturday, September 18, 2021, at UnityPoint Methodist Hospital. He was born in Peoria on August 15, 1960, to Merle, Sr. and Maybelle (Wood) Ice. He married Regina Meischner on February 20, 1992, in Peoria; she survives. Also surviving are his daughter, Kayla Meischner of Peoria Heights and his son, Neil Patrick Ice of Peoria; his two sisters, Marchelle (Dave) Gotwalt of Blythedale, MO and Melinda (Don) Palmer of Manito; his three brothers, Morris Ice of Eldon, MO, Mark Ice of Peoria, IL, and Kevin Ice of Peoria, AZ; two granddaughters, Ashlynn and Sophia, and one grandson on the way, Ambrose. He was preceded in death by his parents and four brothers, Mike, Merle, Mitchell, and Marvin. Murray worked as a truck driver for IDOT for 15 years and for the City of Peoria in the Street Department. He was a musician for over 40 years and was a drummer in several local bands, including The Static. He was a loving, caring family man and a friend to many. The family extends special thanks to the nurses at UnityPoint on 4 Hamilton. A Memorial Benefit and Celebration of Life will be held on Saturday, October 16, 2021, starting at 11:00 AM, with a memorial service, officiated by Rev. Steve Barch, beginning at 1:00 PM, at BG Karaoke Saloon in Bartonville. Gary Deiters Funeral Home and Cremation Services in East Peoria is assisting the family. Memorials may be made to the family c/o the funeral home or to the GoFundMe page organized by Neil Ice at https://www.gofundme.com/f/8mpgg-my-dads-funeral-costs. Online condolences may be left at www.GaryDeitersFH.com.

The family of Murray P. Ice created this Life Tributes page to make it easy to share your memories.

Murray P. Ice, 61, of Peoria, passed away on Saturday, September...

Send flowers to the Ice family.