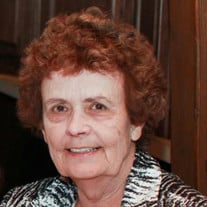 Nancy Ann Gustafson Gould, 85, of Gridley, formerly of East Peoria, passed away May 4, 2019, at Apostolic Christian Restmor in Morton. Nancy was a member of the Apostolic Christian Church in Morton. Nancy glorified God in all that she did. She is now safe in the arms of Jesus. She was born on December 9, 1933, in Peoria, IL to Clarence and Ruth (Scott) Gustafson who both proceeded her in death. Nancy graduated from East Peoria High School in 1951. During her high school years, she was a majorette and was chosen the Queen of the East Peoria Fall Festival. Nancy met Jack Gould in high school and they were married on August 20, 1953, in East Peoria. Nancy and Jack were married for almost 64 years before being separated by his death in 2017. She looked forward to being with Jack after her death. Nancy and Jack have three children; Cindy (Jerry) Hann, Jim Gould, and Becky (Mark) Funk. Other survivors include seven grandchildren: Rick Winn, Tim (Liz) Hann, Amanda Winn, David Hann, Courtney (Garrett) Yackley, Philip (Marisa) Hann, and Codey Funk; seven great-grandchildren, Stewart Winn, Vikkie and Dominic Hann, Lyla, Norah, Sadie, and Ellie Yackley; her sister-in-law, Lynda Gustafson; brother-in-law, Steve (April) Gould; as well as five nephews, Glen (Carol) Gould, Mark (Kelly) Gould, Paul (Jovy) Gould, Jeff Gould, and Gregory Gould; and four nieces, Lisa (Steve) Snyder, Jamie Gustafson, Wendy Gould-Crotz, and Jill (Mark) Mattern. In addition to her parents and husband, Nancy was preceded in death by her brother, Jim Gustafson; mother and father-in-law, Helen and Glen Gould; brother-in-law, Bill Gould, and sister-in-law Pat Gould. Nancy's family thanks Apostolic Christian Restmor and the ministers of the Apostolic Christian Church for the loving care and support she received. In lieu of flowers, the family would appreciate donations to Apostolic Christian Restmor, 1500 Parkside Avenue, Morton, Il 61550. Nancy's funeral service will be at 1:00 pm on Tuesday, May 7, 2019, at Gary Deiters Funeral Home and Cremation Services in East Peoria. Visitation will be from 11:00 Am until the time of service at the funeral home. Burial will be at Fondulac Cemetery in East Peoria.

The family of Mrs. Nancy A. Gould created this Life Tributes page to make it easy to share your memories.

Send flowers to the Gould family.