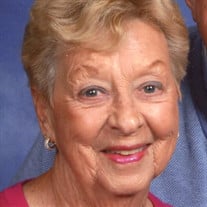 Peggy Ann Weber – who never liked waiting much – surprised all of us on Thursday, February 22, 2018, when she passed away at the age of 84. Mimi or Grammy, as she was affectionately known, was born October 23, 1933 in Akron, Ohio to Meggs and Daphne Reinhart. Soon after, the family moved to Pennsylvania where she met her future husband and partner in life, Loyd Weber. They married on June 10, 1953, and eventually moved to the Peoria-area where they lived for the next six decades. Peg was a woman of many colors, who found joy in the small, seemingly ordinary moments in life. Fresh sage from the garden. A deer poking around the backyard. The thermostat set at eighty degrees. She was a woman of faith, and loved decorating her home with paintings from her husband. And nothing made Peg happier than having the entire family over. The trick was fitting everyone in one room. First came Sue (1958), then Jeff (1961), then Scott (1964). That led to grandkids, and great-grandkids, not to mention a number of furry, four-legged friends. For many years she worked as an assistant in local school districts. During the summer, she’d often escape to Manson Heights with her family or end up at a baseball game where the buzz of her kazoo could be heard over any of the loudest parents in the stands. An ideal day for her started and ended on the beach, and she always looked forward to the winter months when she could escape to one of her favorite spots — Anna Maria Island. She was achingly funny at times, and could also laugh at herself. A call from Mimi was a wide-ranging affair that touched on everything from her favorite daytime soap operas to her latest round of golf. Her optimism and a quick “hey honey” have turned around many a bad day. She is preceded in death by her parents, and brother, Buddy. She leaves behind her beloved husband of 64 years, Loyd Weber; sister, Helen Neese; brother, Skip Reinhart; daughter, Sue Hurd and husband Randy; son, Jeff Weber and wife Kathy; son, Scott Weber and partner Rachel; nine grandkids, Brandon, Ryan, and Nathan Hurd, Nikki McDonald, Chelsey Giroir, Zachary, Lynsey, and Joshua Weber, Hannah Weber; as well as nine great-grandkids, Delaney, Brynley, Landry, Claire, Lauren, and Lillian Hurd, Carter and Callahan McDonald, and Kamdyn Giroir. Visitation will be held Sunday, February 25, from 3-5 PM at Gary Deiters Funeral Home & Cremation Services, Inc. in East Peoria. Funeral service will be Monday, February 26 at 11 AM with a visitation an hour prior at United Presbyterian Church in Peoria. Burial will follow at Fondulac Cemetery in East Peoria. Rev. Laura Reason will officiate. Memorials may be made to the Preschool at her church. Online condolences may be made at GaryDeitersFuneralHome.com

The family of Mrs. Peggy Ann Weber created this Life Tributes page to make it easy to share your memories.

Peggy Ann Weber – who never liked waiting much – surprised all...

Send flowers to the Weber family.