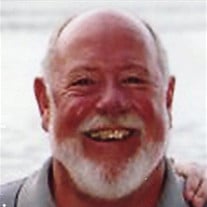 Robert Parker Scott Jr., 71, of Peoria passed away peacefully at 9:50 P.M., Friday May 17, at home. Bob was born on November 5, 1947 in Chicago to Robert Parker and Doris (Bolstad) Scott, Sr. He married Patricia Anne Murphy of East Peoria on June 27, 1970. Bob attended Wauconda High School, he was an outstanding athlete holding many records in track, basketball and football. He was recruited by Fordy Anderson to play basketball at Hiram Scott College in Scottsbluff, NE. When Coach Anderson traveled through Peoria, he entertained the family with highlights of Bob’s basketball career. Bob graduated from SIU in 1969 with a BS in business management. He then began his career in Chicago at the Kemper Group as an underwriter and sales manager. He enjoyed the sales division and bought his first insurance agency in 1976 in Peoria. He served on the Agents Advisory Board for the CNA Ins. Group and was a member of Professional Ins. Agents of America. He had a series 7 stockbroker license and was on the Advisory Board for INA ins. Group. In 1986, he and his brother-in-law, John P. Murphy, founded Integrated Insurance and Risk Management. Bob retired in 2012. Over his career he also served on the Boards of Easter Seals and Bradley Braves Chief’s Club. He was an avid golfer at Mt Hawley C.C. and served as Board President. He enjoyed the 19th hole in the Green Room many afternoons. He was an accomplished gardener and gourmet cook and never missed a great song on the dance floor. He loved boating and restored a wooden boat to live again. A favorite vacation was with friends Mike and Linda McMullen motoring over Lake Michigan for a week in Saugatuck, MI. Bob is survived by his wife, Patricia, sisters Jennifer (Dennis) McCracken of Lake Zurich, IL and Debbie of Larkspur, CO, his sons Robert “Bo” (Jen) of Castle Pines, CO and Andrew (Kelly) of Peoria. His grandchildren, who he treasured, Robert Parker, Jacob Patrick and Madison Murphy Scott of Castle Pines, CO, his sister-in-law Jane (Pat) Bailey of Eau Claire, WI, brother-in-law John (Connie) Murphy of Peoria and several nieces and nephews. He loved them all and was happiest when the family was all together. A special thank you to Ruby, Katrina and Cheryl from Unity Point Hospice who were amazing angels, and to Dr. Brian Cohen who cared and assisted us at every step. Family will receive friend at Resurrection Mausoleum from 1:00 – 3:00 P.M.on Saturday, May 25th followed by a private memorial service . Cremation rites have been accorded. In lieu of flowers, memorials may be made to Easter Seals or Sacred Heart Catholic Church. The staff at Gary Deiters funeral home in East Peoria is assisting the family with these services. Please leave online condolences at GaryDeitersFuneralHome.com.

Robert Parker Scott Jr., 71, of Peoria passed away peacefully at 9:50 P.M., Friday May 17, at home. Bob was born on November 5, 1947 in Chicago to Robert Parker and Doris (Bolstad) Scott, Sr. He married Patricia Anne Murphy of East Peoria on... View Obituary & Service Information

The family of Mr. Robert Parker Scott Jr. created this Life Tributes page to make it easy to share your memories.

Send flowers to the Scott family.