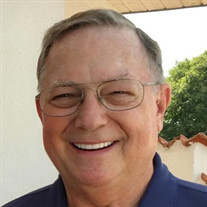 Ronald G. Morgan, 74, of East Peoria, passed away on Thursday, March 17, 2022, at OSF Richard L. Owens Hospice Home in Peoria. He was born in Davenport, IA on February 8, 1948, to Forrest and Emily (Kuntz) Morgan. He married Emma Low Staples in Pekin on December 12, 1987; she survives. Also surviving is his son, Brian (Katie McGrath) Morgan of Washington; his stepson, Randall (Tina) Staples of Havelock, NC; his sister, Patti Morgan of Peoria; two brothers, Dennis Morgan of Hanna City and Gary Morgan of Peoria; and three grandchildren, Jesse, Vaughn, and Cherokee. He was preceded in death by his parents; his brother, Larry Morgan; his sister, Sharon Stevens; and his grandchild, Jade. Right out of high school, Ronald took a job at Caterpillar, but left to serve in the Marines during the Vietnam War. After serving, he went back to Caterpillar and retired in 2009 as an electrical engineer after 35 years. He then started working at Manufacturing Maintenance Solutions in Tremont, just retiring recently due to his health. He and Emma hosted several foreign exchange students and recently traveled the world to visit them all. He was a very active, life-long member of Bay View Baptist Church in Washington. Ronald was an amateur ham radio operator and was elected Chairman of the Peoria Chapter of ASM International. He received many awards, especially related to Morse code. The family will receive friends from 4-6 pm on Monday, March 21, 2022, at Gary Deiters Funeral Home & Cremation Services in East Peoria, with a funeral service at 11:00 am on Tuesday, March 22, 2022, at the funeral home. Pastor Keith Thibo will officiate. Burial will follow at Roberts Cemetery in Morton. Memorials may be made to Bay View Baptist Church or Illinois Central Christian School. Online condolences may be left at www.GaryDeitersFH.com.

The family of Ronald G. Morgan created this Life Tributes page to make it easy to share your memories.

Send flowers to the Morgan family.