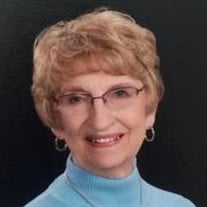 Services for Sherron A. Quiring, 84, of East Peoria, IL, formerly of Fairmont, MN, will be 11:00 a.m. Friday, April 27, 2018, at the Immanuel Lutheran Church in Fairmont. A private family burial will be held at Lakeside Cemetery at a later date. Visitation will be 4:00 p.m. to 7:00 p.m. Thursday, April 26, 2018, at the Lakeview Funeral Home in Fairmont and will continue one hour prior to the time of service at the church. Sherron passed away on April 16, 2018, at her home in East Peoria, IL, after a short terminal illness. The Lakeview Funeral Home and Cremation Service of Fairmont is assisting the family with arrangements. A memorial service will be at 6:30 PM at St. Peter's Lutheran Church in East Peoria, with a visitation 30 minutes prior. Sherron was born June 29, 1933, in Echo, MN. She received a degree in Education at Mankato State University, where she met her first husband, Del Quiring. Sherron and Del were married on December 27, 1954, and moved to Fairmont, MN, where they raised their 3 children and enjoyed life together until Del’s passing in 2004. In 2013, Sherron’s second love story began when she married Gordon Pullen, who she had met 60 years earlier at Echo High School. Sherron and Gordon lived in East Peoria, IL, and enjoyed nearly 5 years of fun and travel together until her passing. Sherron was a lifelong teacher, spending most of her career as a Kindergarten teacher at St. Paul’s Lutheran School. She loved her students and sharing God’s word with them. Sherron loved her family deeply, and was known by many for her kindness and caring. She was a woman of God, who leaves a beautiful legacy of love and faith. Sherron especially enjoyed Twins baseball, time with friends and family, playing bridge, road trips, and studying the bible. She will be deeply missed by her husband, Gordon Pullen; children, Craig (Marcie) Quiring and Nancy (Jeff) Fisher; daughter-in law, Kelly (the late Randy) Quiring; brother, Algene (Jan) Bruss; grandchildren, Carissa Quiring, Shelby (Paul) Smith, Jordan Nadel, Callie Quiring, Quincy Quiring, Noah Quiring, Wyatt Quiring, and Rayah Quiring. In addition, she will be greatly missed by Gordon’s family, including his children, Kent (Marla) Pullen, Sheryl (Eric) Riley, and Lisa (Ryan) McGuinness, and grandchildren, Mark Pullen, Jacob Pullen, Justin Riley, Lindsey Riley, Dane Riley, Jenna McGuinness, Lauren McGuinness, and Ryan McGuinness, Jr. She’ll also be missed by many special nieces, nephews and great-grandchildren. She was preceded in death by her parents, Walter and Viola Bruss; first husband, Del Quiring; and her son, Randy Quiring. Memorial gifts may be made to Martin Luther High School in Northrop, MN.

Services for Sherron A. Quiring, 84, of East Peoria, IL, formerly of Fairmont, MN, will be 11:00 a.m. Friday, April 27, 2018, at the Immanuel Lutheran Church in Fairmont. A private family burial will be held at Lakeside Cemetery at a later... View Obituary & Service Information

The family of Mrs. Sherron A. Quiring-Pullen created this Life Tributes page to make it easy to share your memories.

Services for Sherron A. Quiring, 84, of East Peoria, IL, formerly...

Send flowers to the Quiring-Pullen family.