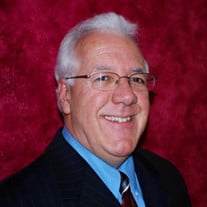 Steven A. Buttice, 67, of East Peoria, passed away on February 3, 2021 at OSF Hospital in Peoria, from complications of Idiopathic Pulmonary Fibrosis. Steven is fondly remembered by friends and family as a kind person who kept a positive outlook throughout life and during his terminal illness. He left behind a message of grace, hope, and love of God. Steven was an avid sports fan and cheered for the Chicago Cubs as well as his alma mater, the University of Illinois, where he graduated with a degree in Landscaping Architecture and later returned for a certificate in Geriatric Management. He coached youth baseball, was a long-distance runner, and finished dozens of regional races including a half marathon. He was also a member of the Robein School Board. Steven was born on September 17, 1953 to Benjamin and Lillian (Montalbano) Buttice in Rockford. In 1990, he founded his first company, Medical Reimbursement and Management Services. Later, he branched out into real estate and also started his second company, Living by Your Design, a senior living planning company. Steven married Linda Kay Burroughs in March 1991 and was honored to become the parent of three young girls, followed by the birth of his son Steven Buttice II. Steven is survived by his children, Alliyah (Brian Valinski) Mirza of Santa Fe, NM, Anisah (Geoff Brengle) Mirza of Chicago, Miliah (Jake Wagner) Mirza of Elmwood, and Steve (Lindsay) Buttice II of Germantown Hills; and brother, Mark (Cheryl) Buttice of Timnath, CO; 3 grandchildren Farrah and Bruce Wagner, and Liam Buttice. He was preceded in death by his parents and brother, James Buttice. A visitation will be held for Steven on Tuesday, February 9th from 6:00-7:00 PM at Gary Dieters Funeral Home and Cremation Services in East Peoria, Illinois, with a Celebration of Life following. Memorials may be made to Mid-America Transplant Foundation at 1110 Highlands Plaza Dr. East, Suite #100 St. Louis, MO 63110 or online at www.midamericatransplant.org/our-foundation/donate-online. Online condolences may be left at www.GaryDeitersFH.com.

Steven A. Buttice, 67, of East Peoria, passed away on February 3, 2021 at OSF Hospital in Peoria, from complications of Idiopathic Pulmonary Fibrosis. Steven is fondly remembered by friends and family as a kind person who kept a positive outlook... View Obituary & Service Information

The family of Steven A. Buttice created this Life Tributes page to make it easy to share your memories.

Steven A. Buttice, 67, of East Peoria, passed away on February...

Send flowers to the Buttice family.