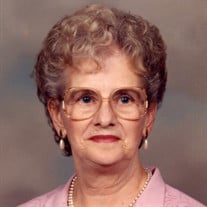 T. June Martinie-Phegley, age 96 of East Peoria, passed away on Thursday, December 17, 2020 at Generations at Riverview in East Peoria. She was born to Harry E. Baughman and Mabel F. Kline on June 21, 1924 in Fouke, AR. She married, Eldon “Darrell” Martinie, and later married Max R. Phegley, and they both preceded her in death. She was also preceded in death by one son, Darrell Edward Martinie; an infant daughter, Diana Lynn Martinie; and seven siblings, Harry (Laura) Baughman, Doris (Warren) Davis, Hazel (Norman) Werth, Ruth (Joseph) Yechout, Edith (Milo) Johnson, Lloyd (Libby) Baughman, Keith (Delores) Baughman. June is survived by her daughters, Beverly (Thom) Foster of Maui, HI, Bonnie Martinie of Naperville, and Susan (Jeff) Hickerson of East Peoria as well as step-son, Roger (Lisa) Phegley of Morton, step-daughter, Connie (Phegley) Self of East Peoria, and many nieces and nephews. June felt very blessed to have grandchildren and loved hearing stories of their accomplishments. Her grandchildren include John (Maureen) Greene of Palatine, Katherine Foster (fiance’ Sean Hower), Casey Foster of Maui, Nathan (Jen) Van Allen of Chicago, Justin Hickerson of East Peoria, Caitlin Hickerson of Milwaukee, and Evan (Christina) Hickerson of Lake Camelot; as well as seven great-grandchildren. Her great-grandchildren were such a joy in her life. They include Porter and Emerson Van Allen, Kaleigh, Jayden and Tanner Hickerson, and Tyler and Adam Greene. June wore many hats in life - She was a Bradley University student, a homemaker, a dental assistant for the Peoria County Health Department, a registrar at East Peoria High School, and worked for the East Peoria Chamber of Commerce. She was a founding member of the East Peoria First United Methodist Church in 1957 and enjoyed teaching Sunday School classes over the years. A private family service will be held at 1:00 PM on Wednesday, December 23, 2020 and will be live streamed at www.epfumc.com. Graveside services will be public and will take place at 2:00 PM at Fondulac Cemetery. She was so loved by her family. It’s so very hard to describe in words the heavy heart felt by her daughters and family. She was such a caretaker to her husband, son Darrell during his struggle with Juvenile Diabetes, and Max, during his battle with cancer. Memorials may be made to June’s church, The American Diabetes Foundation, The Cancer Foundation, or the charity of your choice. Online condolences may be left at www.GaryDeitersFH.com.

T. June Martinie-Phegley, age 96 of East Peoria, passed away on Thursday, December 17, 2020 at Generations at Riverview in East Peoria. She was born to Harry E. Baughman and Mabel F. Kline on June 21, 1924 in Fouke, AR. She married, Eldon... View Obituary & Service Information

The family of T. June Martinie-Phegley created this Life Tributes page to make it easy to share your memories.

Send flowers to the Martinie-Phegley family.