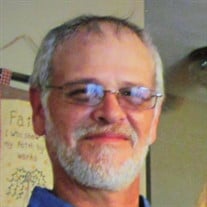 Troy Lee Franklin, 56, of East Peoria, passed away on April 1, 2022, at his mother’s home. He was born in Peoria on March 26, 1966, to Kenneth and Virginia (Bowman) Franklin. He married Michele Grotz, the love of his life, at Groveland Chapel on June 3, 2005. Their relationship was admired by many. She survives. Also surviving are his mother, Virginia Franklin of East Peoria; his son, Trevor Franklin of Creve Coeur; Tori Anderson of Pekin, whom he treated as his own daughter; McKenlee, Kyson, & Catalina, whom he loved as his own grandchildren; Becka Vance of Creve Coeur, whom he thought of as a daughter; and Robert Thatcher of Creve Coeur, who was like a brother to him. He also leaves behind his beloved cat, Gabby, who worshiped her daddy. He was preceded in death by his father; his brother, Bryan; and his mother-in-law who loved him like a son, Donna Grotz. Troy was a warehouse manager at Cope Plastics in East Peoria for 35 years. He enjoyed camping, fishing, & hunting, and loved his Bud Light and Crow’s fish. Troy was a one-in-a-million husband, father, pa and son who loved his friends like family. The family would like to thank the nurses and staff at Transitions Care, especially Laura M., for their care and comfort during this difficult time. Cremation rites have been accorded. There will be a Celebration of Life at a later date. Gary Deiters Funeral Home & Cremation Services of East Peoria is assisting the family. Memorial contributions may be made to St. Jude Midwest Affiliate or Hooked On Fishing. Online condolences may be left at www.GaryDeitersFH.com.

Troy Lee Franklin, 56, of East Peoria, passed away on April 1, 2022, at his mother&#8217;s home. He was born in Peoria on March 26, 1966, to Kenneth and Virginia (Bowman) Franklin. He married Michele Grotz, the love of his life, at Groveland... View Obituary & Service Information

The family of Troy Lee Franklin created this Life Tributes page to make it easy to share your memories.

Send flowers to the Franklin family.