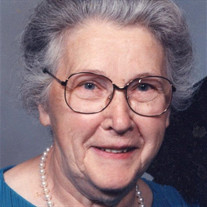 Vernice Arnholt, 99 of Columbus, Indiana died at 4:55 AM on Tuesday, September 19, 2017 at her daughter’s home in Groveland, IL. Vernice was born on Nov. 1, 1917 in Newbern, Indiana to Frank and Ida (Romine) Wilson. She married Edwin Arnholt on April 8, 1945 at Wilson Chapel Christian Union Church near Elizabethtown, Indiana. He preceded her in death on June 29, 2002. Vernice’s survivors include 3 daughters: Karen (John) Brunner of Franklin, NC, Marybelle (Dave) Miller of Lincoln, Nebraska and Janet (Joe) Weyer of Groveland, IL. Also surviving are her brothers Owen (Carol) Wilson of Westport, Indiana, and Paul (Vera) Wilson of Elizabethtown, Indiana; 10 grandchildren and 24 great grandchildren. She was preceded in death by 2 sons Marshall Edwin and Milton Wayne; 4 brothers Amith, Shirley, Keith and Lorel Wilson; 3 sisters Louise Davis, Ivis Reed and Dolores Macdonald. Vernice dedicated her life to Jesus Christ and served Him in many ways including teaching children (beginning with her own) and volunteering in various church ministries. Vernice was a loving wife and mother who was quick to show hospitality, and loved both cooking and gardening. Her funeral service will be held on Saturday at 11:00 AM at Wilson Chapel Christian Union Church, 9435 Indiana 7, Elizabethtown, Indiana. Visitation will be from 9:30 to 10:45 AM on Saturday prior to the service at the church. Burial will be at St. Paul’s Lutheran Cemetery, Columbus, Indiana. Memorials may be made to Wilson Chapel Christian Union Church, Elizabethtown, Indiana. Gary Deiters Funeral Home assisted the family in local arrangements. Online condolences may be left at GaryDeitersFuneralHome.com

The family of Mrs. Vernice L. Arnholt created this Life Tributes page to make it easy to share your memories.

Send flowers to the Arnholt family.