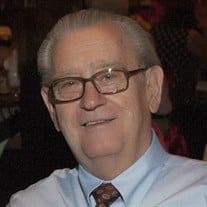 William “Bill” Fuquay, age 79 of Peoria, passed away on Monday, November 2, 2020, at UnityPoint Health Methodist in Peoria, Illinois. He was born to Elmer Ellsworth and Lillian Rae (Falls) Fuquay on December 5, 1940, in Evansville, IN. He married Carolyn Vaughn on January 13, 1962; they divorced in 1989. He later married Carolyn “Sue” Welborn on October 19, 1992. Sue preceded him in death on December 3, 2019. Bill was also preceded in death by his parents and three sisters, Aileen Johnston, Laurabelle Moran, and Pat Miller. Bill is survived by his Daughters Shellie Frost of Peoria, Krissy Fuquay of Largo, FL., Grandson Alex Frost of West Chicago, and Stepsons Mike Mumey of Pekin and Tom Mumey of Texas. Bill attended Manual High School in Peoria and was a member of the 1958 graduating class. In 1955, he set the record for the longest pass in the annual Turkey Day Football Game, played by Manual and Central High Schools. Bill still holds the record of 76 yards. After graduating high school, he served in the United States Army where he was stationed in Germany from 1958 until his honorable discharge in 1961. He was quarterback for the Army football team which gave him the opportunity to travel to Austria, France, Italy, and England. Bill worked in the trucking and transportation industry for 30 years and then for OSF St. Francis for 15 years. He worked eleven years in the OSF Physical Therapy Department and four years at the Center for Health. He also worked at the Veterans’ Home for two years. Bill enjoyed bowling, fishing, golfing, watching NASCAR, cheering on the St. Louis Cardinals, the Illinois Fighting Illini, the Chicago Bears, camping, playing cards, and loved his dogs. As a sports enthusiast, he also enjoyed coaching girls’ softball, playing jarts and horseshoes. He could never pass up a Theo’s chili dog or Davis Brothers pizza. Bill will be remembered for his sense of humor, strong work ethic, and his love of sweets. He was a member of American Legion Post 979 in Bartonville. It was Bill’s wish to be cremated and a memorial visitation will be held on Sunday, November 8, 2020, from 3:00-5:00 PM at Gary Deiters Funeral Home & Cremation Services in East Peoria. Masks will be required, and social distancing guidelines will be followed. Memorials may be made to Salvation Army or TAPS (Tazewell Animal Protective Society). Online condolences may be left at www.GaryDeitersFH.com.

The family of William "Bill" E. Fuquay created this Life Tributes page to make it easy to share your memories.

Send flowers to the Fuquay family.