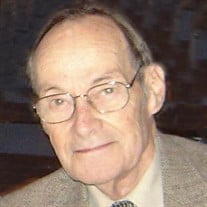 William Gerald Phillis of Peoria, formerly of East Peoria, passed away at 10:30 PM on Saturday, November 24 at Richard L. Owens Hospice Home. Bill was born June 22, 1931 to Og A. and Lillian Parr Phillis in Monmouth. His family moved to Cambridge when he was about 2 years of age. On June 11, 1955, he married Anne Meldrum in Champaign. He is survived, by Anne, his wife of 63 years, and their sons Dr. James (Susan) Phillis of Hendersonville, NC, and Roger (Penny) Phillis of Morton. Also surviving are grandchildren, Bradley (Lauren) Phillis of TN, Bethany Phillis of NC, Benjamin Phillis (Luca Molnar) of New Jersey; Ryan (Margaret) Phillis of Morton, Justin (Samantha) Phillis, of Fairmont, MN, Kelsey Phillis (Austin Simpson) of Davis, CA, Joseph (Marie) Logsdon of East Peoria and Sara Logsdon (Tony) Magee of Peoria; great-granddaughters, Lilianna and Evangeline Phillis of Morton, Lydia and Nora Grace Phillis of Fairmont, MN and Patricia Magee of Peoria. Brother, Dr. Richard (Diane) Phillis of Milan and sister-in-law, Wilma Phillis of Moline also survive. Preceding him in death were, daughter, Sandra Jo, his parents, and brothers, Calvin Veith, Kenneth, Robert and Donald Phillis and sisters Lois Anderson Britt and Lucille Rishel and great-granddaughter, Amelia Phillis. Also, preceding him in death was his sister Dolores Jean, a freshman when Bill was a senior at Cambridge High School who died of polio at the height of the polio epidemic. He is also survived by many nieces and nephews and grand-nieces and nephews. Upon the death of their daughter, Sandra, in 2002, Bill and Anne made a home for her two children, Joseph and Sara. Bill graduated from Cambridge High School and attended one year at Bradley University before being called to active duty in the US Marine Corp. He graduated from University of IL in Champaign and worked for 30 years at Caterpillar. Following his retirement from Cat, he worked for Bob Blume Construction for 17 years and during that time was active in Home Builders Association. Bill served on the East Peoria Zoning Board for 23 years, serving as chairman for 14 years. He also served as treasurer for the Tazewell Republican Party. One of his proudest achievements was when he made Eagle Scout during his high school years in Cambridge. He was a loyal Marine, a loyal Illini, and most of all loyal to the Chicago Cubs; he, his sons, and his grandkids celebrated as the Chicago Cubs won the World Series in 2016 after a 108 year drought. One of the highlights of his later years was a trip to Washington DC on The Greater Peoria Honor Flight in 2015 with both sons, Jim and Roger accompanying him as his guardians. Bill and Anne enjoyed traveling throughout the United States and Canada, plus touring several European nations; and Egypt and Turkey, which were particularly memorable trips. His happiest moments were those spent with his family. He so much enjoyed making his annual contribution to the holiday menu, fudge and chocolate covered peanuts. Bill was a member of First Baptist Church in Morton where he had served as Property Committee Chairman. He had served as Treasurer and Assistant Treasurer for Metro Peoria Baptist Association. Visitation will be at Gary Deiters Funeral Home, 444 E. Washington St., East Peoria on Thursday, November 29 from 4:00 to 6:00 PM. Services will be held at First Baptist Church in Morton at 1:00 PM Friday, November 30 with a visitation an hour prior. Dr. Richard Shaw is officiating, assisted by Bill’s son, Pastor, Dr. James Phillis. Burial will be private at Fondulac Cemetery in East Peoria. In lieu of flowers, memorials may be made to his church, the Greater Peoria Honor Flight, Lutheran Hillside Village Benevolent Care, or to a charity of the donor’s choice.

The family of Mr. William "Bill" Phillis created this Life Tributes page to make it easy to share your memories.

Send flowers to the Phillis family.