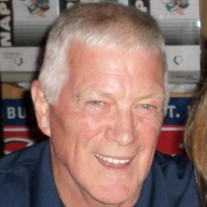 William “Bill” McCrae, 73, of East Peoria, passed away on Saturday, July 24, 2021, at Unity Point Health Methodist in Peoria. He was born on November 26, 1947, to Fletcher and Betty (Smith) McCrae in Peoria. He married Justine Rice on August 15, 2007, in Las Vegas, NV, she survives. He is also survived by his two brothers, Robert (Sally) McCrae of El Paso, TX, and Jim (Maria) McCrae of NC; one granddaughter, Amelia McCrae; his stepdaughter, Brooke Schoenman of Australia; his stepson Brett (Kaitlin) Schoenman of Indianapolis, and his step-granddaughter, Daphne Schoenman. He was preceded in death by his son, Ryan T. McCrae. Bill served in the Army from 1967-1969 during the Vietnam War. He worked for 33 years as a supervisor and mail handler for the US Postal Service, retiring in 2008. He was an avid Cardinals baseball and Chicago Bears football fan. He loved his dog, Sobachka, and enjoyed riding his Harley, golfing and snow skiing. A funeral service will be held at 2:00 PM on Thursday, July 29, 2021, at Gary Deiters Funeral Home & Cremation Services in East Peoria, with visitation one hour prior to the service. There will be a Celebration of Life at a later date. Memorials may be made to the American Heart Association. Online condolences may be left at www.garydeitersfh.com.

The family of William "Bill" McCrae created this Life Tributes page to make it easy to share your memories.

William “Bill” McCrae, 73, of East Peoria, passed away on Saturday,...

Send flowers to the McCrae family.